Thank You, May I have Another?

The Red Sox lost their 5th straight game yesterday, but the Rangers lost too, making the red Sox the AL Wild card winners! Right is Scott Feldman, the Rangers best pitcher wiping himself as the Rangers went down. The Red Sox also have a very good record at 91-66 because the Phillies for example, are 91-66 and are 5 games ahead of the Braves. The Red Sox a 91-66 and are 10.5 games behind the Yankees. (but it doesn't matter now) Tonight, Tim Wakefield (11-4) goes up against Roy Halladay. (16-10) Despite the fact that he is a Cy Young candidate, the Red Sox have had their way with Halladay for most of this year. Halladay has also gone only 5-7 since the All-Star Break. The Red Sox really need to pick it up though, they can beat the Blue Jays!

Posted by Conor Duffy at Wednesday, September 30, 2009 No comments:

Papi is inching closer and closer to winning the Player of the Year Award as he is now just one away at 7 and if he wins next week, he and Bay will tie! He got 3 homers and 10 RBIs this past week, but it did not help as the Red Sox had an awful week, going 2-5. Papi is now hitting .235 with 27 Hrs, and 94 RBIs. The Yankees clinched the AL East title today when they recorded a sweep of the Sox. The Sox are currently at 91-64 at 8.5 games behind the Yankees, but still 6 games ahead of the Rangers for wild card. The Sox play a 3-game series and a 4-game series aginst the Blue Jays and the Indians to conclude the season. Next week at this time, I'm going to be writing the Yearly News, so the Sox had better play well!

Posted by Conor Duffy at Sunday, September 27, 2009 No comments: 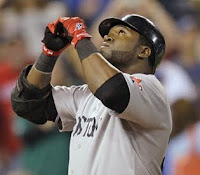 Last night, the Red Sox defeated the Royals 10-3, earning them a split series after losing the first two. David Ortiz and Clay Buchholz dominated in this one. Ortiz hit a homer, along with 3 RBIs, in the last game, Big Papi hit a homer and 4 RBIs, he is on a roll right now. He currently is hitting .237 with 26 homers, and 91 RBIs, which is amzing after the way he started the season. Buchholz was another top story as he threw 6.2 scoreless innings while striking out 8, he is now 7-3 with a 3.21 ERA and 58 Ks, he started out the season 1-3, but has not gotten a loss in quite a while. This was his first win against any team not in the AL East. The Sox square off at Yankee Stadium tonight as they look to beat the Yanks with Lester going to the hill tonight.

Last night, the Red Sox suffered an awful loss to the Royals, squandering a 6-run lead in a 9-12 loss. One bright spot in this loss, was Tim Wakefield finally got to pitch after his first start being on September 5. He did not suffer the loss, but he did not pitch well, allowing 4 earned runs through five innings while walking 7. He is now 11-4 with a 4.33 ERA. He has only made 3 starts since the All-Star Break after starting out the season amazingly. Luckily for the Sox, the Yanks lost as well as Joe Saunders baffled them for 8.1 innings. Unforunately the Rangers won, pushing it to a still comfortable 7 game lead. Still, the Sox need to go right at this wild card position, or First Place, that would work too! 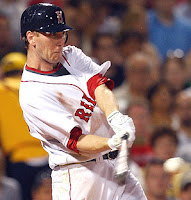 Well, it looks like Bay is going to be the Player of the Year, unless David Ortiz wins the next two, which would result in a tie, Bay wins! This was just another great week for Jason Bay, he won his eighth award, with 3 homers and 8 RBIs. He led the Sox to another 5-1 week, as they are now 9-1 in their last ten games. They are 89-59 and 5.5 behind the Yankees at the moment. Bay is now batting .266, with 35 homers, and 110 RBIs, a spectacular season. He is in the running for AL MVP, but Kevin Youkilis is 3rd in the league in MVP voting, he is hitting .309 with 25 jacks, and 86 RBIs. Youk was also third in MVP voting last year, so these would be back-to-back awesome years! The Sox are surging towards the playoffs, as they are 7.5 ahead of the texas rangers in the Wild Card, and only 5.5 behind the Yanks for 1st Place, if the Yankees win today they clinch a postseason spot.

Posted by Conor Duffy at Sunday, September 20, 2009 No comments: 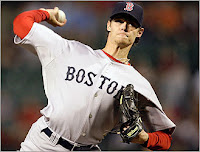 Last night, the Red Sox beat the Orioles 3-1, giving Clay Buchholz his 6th win of the season, as he is 6-3. Buchholz has been amazing, especially against the AL East, as he is 6-1 against the AL East, and 0-2 against everyone else. Last night, Buchholz pitched 6 innings, giving up 1 run, and striking out only 1. The one run he gave up was a majestic homer off the bat of Luke Scott in the bottom of the second. But the Sox had already gotten an RBI single by Casey Kotchman, then Bay answered Scott with a crushed homer to left, before leaving the game in 5th because of sickness. His replacement, Josh Reddick (a rookie) got a single and scored a run on an Ellsbury single, to make it 3-1 in the sixth. The Yankees lost last night on a majestic, 2-run walk-off homer by Ichiro Suzuki, giving the Mariners the 3-2 win. The Sox are 87-59, 6 back from the AL East, and 7 ahead of the Rangers.
Posted by Conor Duffy at Saturday, September 19, 2009 1 comment: 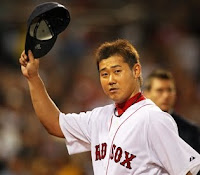 Last night, Daisuke Matsuzaka started his first MLB game since June 19, and was 1-5 with an 8.23 ERA, but after 6 shutout innings against one of the best teams in baseball it is now 2-5 with a 7.02 ERA. Daisuke was able to do something the Red Sox haven't been able to do all season, beat the Angels as the Sox opened up the series with a 4-1 win. Although, I wouldn't look ahead highly, whenever the Sox have played the Angels this year, they have almost always won the first gaame of the series, and lost the next two. The Angels are actually barely better than the Sox, the Angels are 86-58, and the Sox are 85-58, but the Angels lead the AL West and the Sox lead the Wild Card by 5.5 games, but are in Second Place by 6.5. Paul Byrd (1-1) goes up against Joe Saunders, (13-7) hope the Sox can beat them! 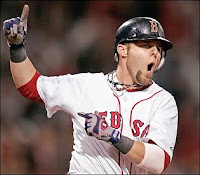 This week's winner of Player of the Week is Dustin Pedroia, so that is #2! He hit 3 homers and 6 RBI, and led himself to a highlight of his career as against the Orioles he hit is first career multihomer game. He also led the Sox to a pretty great week as they went 5-1, sweeping the Rays for the first time this year.(and probably last year too) Pedroia is now batting .297 with 13 HRs, and 63 RBIs as this has been a great year for him, although not comparing to his MVP campain last year. This week the Sox lost 1 to finish a 4-game series against the White Sox, then swept the O's and Rays. Of course the winer of the sweeper against the Rays was a guy who has been about as close to untouchable as you can get lately, Jon Lester. He is 13-7 with a 3.29 ERA and 211 Ks. Only 3 more Weekly News posts left, the scope of the people who could potentially win Player of the Year are Jason Bay, (7) David Ortiz, (6) and Kevin Youkilis. (5) The Sox are looking at the Wild Card spot at 84-58!

Posted by Conor Duffy at Sunday, September 13, 2009 No comments:

Beckett Bounces back in Blowout

After Josh Beckett's last win being on August 12, against the Tigers, after a terrible streak he finally returned to top form and won his long-awaited 15th win. Last night the Red Sox blew the top of the Rays in a rain-shortened 9-1 win. Beckett went 5 innings giving up an earned run and striking out 4, on the season he is now 15-6 with a 3.82 ERA and 180 strikeouts. The Sox scored 8 of their 9 runs in the 3rd inning topped by a 3-run double by Alex Gonzalez, then in the fourth, Kevin Youkilis popped a towering homer into the Monster Seats. Some other positive facts are the Orioles have beat the Yanks in 2 straight games, and by no close score either, 10-4 and 7-3, putting the Sox at 7.5. The Rangers also lost 3-8 to the Mariners, ptting the Sox 3 ahead for the Wild Card lead. Today the Sox play a double-header. Also Daisuke Matsuzaka who can be a great pitcher when healthy is close to coming back from a 3-month injury.

Victor Comes Through in 2-Game Sweep

Yesterday the Red Sox defeated the Orioles 7-5, largely on Victor Martinez's 3-run double (right) in the 7th inning. The Sox are currently 9 games behind the Yanks, at 81-58, while they are 2 games ahead of Texas for the Wild Card. If the Sox win one more game this year, then they have clinched a winning record on the season. Personally I think that the trade for Victor Martinez was a very good one, and even though they traded a cog in their bullpen, they needed a catcher more at the time, and Masterson is not performing on the Indians, he is 1-4 in 7 games there. For the remainder of the week, the Sox are going to play the Rays at Fenway after taking a night off tonight. I think the Sox have a good chance at the playoffs this year! 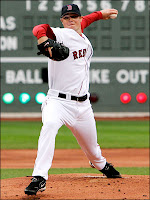 Another week for the Red Sox, and the second pitcher has won the Player of the Week award, Jon Lester, his first time! This week he went 2-0, allowed 2 runs in 13.0 innings, and struck out 17. Jon Lester is now 12-7 with a 3.44 ERA, and 204 strikeouts. (3rd in AL, 4th in MLB) He led the Sox to an OK week, as they went 3-3 with a series win against the Rays and 1-2 against the White Sox, dropping the finale today, 5-1. The Sox are currently 79-58, 2.5 ahead in the Wild Card, but 8.5 behind the Yankees for 1st Place, there looks to be no chance at that for this season. The Sox look to rebound this week with a 2-game series against Baltimore, and a 3-game against Tampa Bay, both at Fenway.

Behind Clay Buchholz's respectable start, the Red Sox beat the Rays in a 3-game series. Right is a picture of Clay and Victor, who have become an unlikely pair of friends. He allowed 3 runs in 6 innings, while striking out 3 and walking 1. Buchholz is 4-3 with a 4.40 ERA this season. In this game, each team scored 2 runs in the first, then in the second Baldelli asks Rays fan why they traded him, and hit a jack. Then in the fifth, the Rays tied the game at 3, before the Sox rallied and scored three more between the seventh and eight. 6-3 was the final score. This was the first series the Sox won since 2007, against the Rays, at the Trop. Go Sox against the Sox! (again)

Posted by Conor Duffy at Friday, September 04, 2009 No comments:

Sox.Rox Views Over The Week

Labels- Everything that's happened since May 2011

Players Of The Year/Week- Founded 2009

PItchers of the Year/Week- Founded 2011